ATV’s (All Terrain Vehicles) have a bad reputation of being dangerous. Each year, many people are injured seriously on them or even killed in accidents on ATV’s. Yes, an ATV can be dangerous, but no more than any other kind of vehicle such as a car, motorcycle, or anything else. ATV accidents are caused mostly due to the improper use or ignorance of it. There are many safety precautions that can be taken to help minimize the risks of riding an ATV. Most of those precautions are common sense. Keep reading to discover more about staying safe while riding an ATV.

The first rule is that no one under 16 years of age should be permitted to ride on an ATV that is full-sized. The American Academy of Pediatrics put forth this recommendation but it should be considered a law to always follow this. People under sixteen years of age are not developed enough to operate a vehicle with this much power. There are other options available to children under sixteen, though, such as smaller models and ones with engines that are less powerful.

Knowing the operating rules for any ATV is very important before trying to operate it. There are courses all over the country that can train you to ride one, so it is always a good idea to enroll in a class before you go out for a ride. One thing you will learn in class is the importance of always riding protective gear such as eye protection, boots, gloves, and a helmet. All of these are necessary to protect your body from the danger of ATV riding in the case of an accident.

A lot of times, an accident on an ATV happens when there is more than one passenger on the ATV. These are made for only one person to ride at a time generally. The extra weight can make the ATV roll over easier. Having the distraction of another person can also cause the driver to wreck. 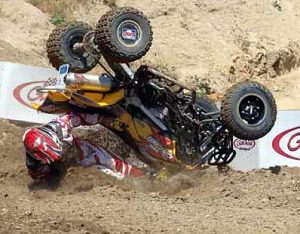 Remember that an ATV is designed to ride off road. You should never ride them on a hard surface like asphalt or concrete. Besides that, riding an ATV on a road is extremely dangerous because of the added dangers of riding along with cars and trucks. Besides, an ATV does not perform well on those types of surfaces and can be very hard to control.

Most ATV accidents happen because of improper use. This can include riding too fast or driving it through terrain that is dangerous. An ATV is built to only go certain speeds over certain terrains. Going over those speeds should not be done because the ATV can roll over and crash. Doing tricks or stunts should also be avoided because of the risk of injury.

Last of all, make sure you have something you can use to communicate with others on your ride. You will need to use it to call for help if there’s an emergency. Now get out there and have fun!